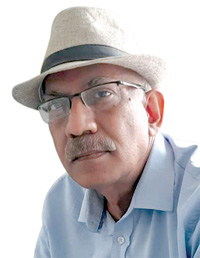 An attendee poses for a photo during the COP27 climate summit in Sharm el Sheikh on Thursday. — Reuters

Discussions and negotiations at the climate change summit in Sharm el Sheikh, Egypt, list several good decisions and gains. Focusing on these would be good while contentious issues will continue to simmer.

The gains of the 27th edition of Conference of Parties on climate change received further boost earlier this week. US President Joe Biden and Chinese leader Xi Jinping agreed to resume cooperation on climate change at the G20 summit in Indonesia.

The summit reaffirmed its commitment to support civil societies through Action for Climate Empowerment [ACE], part of the UN Framework Convention on Climate Change.

On November 11, the US and Egypt announced $150 million to aid Africa’s adaptation to climate change. Africa faces the challenge of access to funds, said Shoukry.

“This agenda comprises 30 adaptation targets by 2030. They will address the adaptation gap and increase the resilience of 4 billion people. This will come through speeding transformation across five impact systems: food and agriculture, water and nature, coastal and oceans, human settlements and infrastructure,” he said.

As part of the US Emergency Plan for Adaptation and Resilience (PREPARE), the US has doubled its Adaptation Fund Pledge to $100 million, and the Accelerating Adaptation in Africa initiative provides $150 million in support to accelerate PREPARE’s work across the continent.

“Egypt as COP27 President and as an African nation knows the challenges of adaptation our continent faces. We have collaborated over the past year with the United States to develop a diverse package of support for Africa for adaptation and resilience,” said Shoukry.

The Adaptation in Africa initiative, previously announced in June 2022 by President Biden and President Sisi, has the potential to result in $4-10 of benefits for every dollar invested.

On Decarbonisation Day, US Special Presidential Envoy for Climate John Kerry said, “How the world combines energy security, transition and affordability issues will have a profound outcome in the future.”

Minister of Petroleum and Mineral Resources Tarek El Molla said, “The food not on our table, the crops wiped out is a global problem. This needs global solution.”

The summit’s second thematic day on science urged scientists to do more to make their data available and understandable to help policymakers fight climate change.

COP President Shoukry said, “While we cannot turn back time on melting glaciers and reverse global emissions, we can stop backsliding on our commitments and slow down, even stop some of the impact of climate change by drawing upon science to find solutions.”

The summit made history by hosting the first ever youth-led climate forum. This session assembled high-level policymakers with young representatives from the Conference of the Youth (COY17). The session focused on the role of climate education for youth, adolescents and children, and strengthening climate action.

While observers recognise delegates engaging in discussions and negotiations on mitigating climate change at the summit, what are the tangible results?

This Tuesday global population reached eight billion. This does not worry some experts. They say excess consumption and not population increase contributes to climate change. Producing, manufacturing, selling, buying and consumption spurs growth and propels the economy.

Will the parties agree to large cuts and roll back? This is likely to remain a constant dilemma for them.