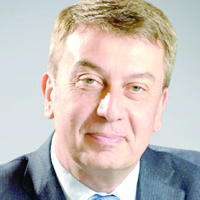 There appears to be a gap between earnings expectations and economic reality. Investors’ concerns over record inflation levels earlier in 2022 have been compounded by supply problems and China’s Covid policies, as well as commodity prices driven by post-pandemic demand and the Ukraine war. To these fears are now added the risk of a recession as central banks try to slow economies with higher borrowing costs.

Faced with four-decade high inflation, the Federal Reserve is increasing interest rates to slow demand and consumers are more pessimistic than at any time since 2014, according to recent polls. By one conventional measure, the American economy is already in recession: the country contracted for two consecutive quarters in the first half of 2022. Economic nervousness about how industrial and consumer demand will hold up is compounding geopolitical tensions, including the Ukraine war and its impacts on food supplies and energy markets, as well as Western tensions with China.

Against this background, it is perhaps unsurprising that the S&P500 index has posted its worst first-six month performance in more than half a century, falling more than 13 per cent year-to-date following a recovery since mid-June. Other US markets such as the Dow Jones Industrial Average and the technology-dominated Nasdaq have fallen between 10 per cent and 20 per cent respectively over the same period.

This performance reflects the fears of investors faced with a catalogue of uncertainties rather than corporate results, which remain largely positive. Results have been supported by strong demand and – in some cases such as energy and select materials sectors – high commodity prices. With around 80 per cent of the S&P500 already posting second-quarter results, nearly three-quarters of reporting companies have beaten earnings per share (EPS) growth estimates, although by narrower margins than during the first quarter. Earnings growth is around 10 per cent higher than the second quarter of 2021 in the US, and more than 20 per cent higher compared with a year earlier in European markets.

However, much of this is thanks to the energy sector. Excluding energy stocks, EPS growth in the US is negative over 12 months and just 6 per cent higher in Europe. Looking ahead, EPS estimates for the rest of 2022 and especially into 2023 have declined since the start of June (see chart, page 2). However, they remain higher than their levels at the beginning of 2022. Despite a widely anticipated US recession, forecasts still also point to positive EPS growth in 2023.

How long will markets reflect economic fears rather than corporate realities? By looking at the time it has taken markets to reach a trough over the past six decades, we find that there were 15 periods in which the S&P500 fell more than 15 per cent. Of these, eight were during recessions, with median declines from peak to trough that lasted 14 months and a 35-per cent decline on average. Outside recessions, peak-to-trough was twice as fast, with a median drawdown of 19.4 per cent.

By implication, based on these historic averages and the S&P500 decline, a further 10-to-15 per cent fall on the index is statistically possible from recent lows if we are heading into a severe recession and around half that level, if a downturn is mild. We believe that we are experiencing a cyclical bear market without the threat of major corrections driven by macroeconomic imbalances. If the past can offer any guide, average maximum drawdowns in such an environment have been just over 29 per cent, with the negative markets lasting a median of 21.6 months. In terms of timing, historic averages point to markets anticipating economic realities by recording a low some six months before countries exit a recession.

Earnings, which have already begun to adjust, therefore have some room to fall further. At the moment, corporate expectations appear consistent with a mild and manageable recession for most industries that are adapting to the current supply and cost challenges. Demand appears to remain resilient for now as households still have some savings after the pandemic, and many stresses are already factored into outlooks. Further, corporate margins still appear healthy with consensus forecasts pointing to improvements in 2023 as companies have so far managed to pass on their rising capital costs. That may change as higher labour costs begin to undermine corporate margins, but after an exceptionally difficult first half of 2022, investors are also becoming more confident in firms’ valuations and managements’ outlooks.

Of course, much of this is distorted by the energy crisis and may yet worsen. While many energy-intensive industries, such as automakers, have coped with increases to their energy production costs, the worst, including possible restrictions or rationing may lie ahead as winter approaches in the northern hemisphere with low gas reserves and high oil prices.